2017 is QAI’s seventh year of being certified under the environmental management system (EMS) standard ISO 14001:2004. Just as QAI is a strong advocate for organics and the environment, QAI’s 39 staff members are also committed to following earth-friendly practices during their work days. Each year, the QAI team continues to improve the company’s carbon footprint. The efforts are headed by EMS core team members (left to right in the photo) Alexandria Villamin, India Genack and Ellery Ward.

In 2013, QAI started collecting plastic personal care products that aren’t easily recyclable elsewhere for TerraCycle’s Natural Care Brigade. That year, the team collected 27 pounds and 3 ounces of personal product containers such as mouthwash bottle caps, deodorant containers and caps, toothpaste tubes and caps, floss containers and toothbrushes. In 2016, the team collected nearly 41 pounds. Not only does TerraCycle recycle the items, but it also allocates points to QAI to be used for other environmentally friendly causes. As an example, at the end of 2016, QAI used its points to plant 4 trees in the U.S., give one person clean water for a year, adopt a little over a square mile of land to protect for wildlife and reduce one ton of carbon in the atmosphere!

In 2014, the QAI team also collected 534 pounds of compost from breakfast and lunch scraps instead of sending that waste to a landfill. By the end of 2016, the team had collected 682 pounds of compost and had taken it home for use in their gardens. In 2016, staff members also had 1,549 zero waste lunches (meals without disposable packaging, plates, cups, utensils or napkins), and took 459 carpooling rides to the office. 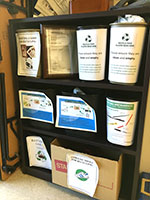 In 2010, QAI started its efforts to become a paperless office by investing in technology that could store the massive amounts of customer documentation, by requesting that clients only send information in an electronic format and, when appropriate, by sending documents to customers electronically. This effort has proven to be very successful. In 2009 (the year before the program started), QAI staff used 144 cases of paper and in 2016, the team only used a little over six cases.

QAI’s environmental goals for 2017 include: